While the rifle is an important part of any hunt, the rounds that you chamber into it are just as important! A favorite pick of many hunters around the world is .308 Winchester. It’s one of the oldest cartridges made by Winchester and one of the most versatile ammunitions in the world.

Here is everything you know about using the .308.

The Story Of The .308 Winchester

The .308 was developed from the .30-06 Springfield, a military-grade round that first saw action in the Spanish-American war. The .30-06 would see more military action in the 1903 Springfield bolt-action rifle in World War 1, and the classic M1 Garand during World War 2.

After the creation of new propellants in the 1950s, Winchester engineers created the .308 cartridge as a sporting round. As a short-action cartridge, the .308 was equally effective in bolt-action rifles and semi-automatic guns.

Because the .308 saw extensive use in both military and commercial rifles, it quickly became the most commonly used cartridge around the world, a record that it continues to hold today.

Why Choose The .308 Winchester?

But why choose the .308 for hunting? Many critics claim that it is outdated ammunition, preferring to recommend 6 or 6.5 mm cartridges for long-range precision shooting. Read on to find out why the .308 shouldn’t be ignored.

.30 calibers have some of the most diverse bullet selections on the market, and few can match the .308’s range. Search any ammunition catalog and you’ll quickly find a .308 for any kind of game, shooting competition, or practice.

The .308 is on the heavier side of rounds, so it’s perfect for punching in steel at any target range. Unlike the light 6.5mm bullets, a .308 can hit any steel plate at over 500 yards without losing too much power. While it won’t be enough to punch a hole through the 1.25-inch plates, it’ll still hit the steel hard enough for your needs.

While there are more specialized rounds that can perform better than the .308, it’s the best solution for when you know your gun. As a cartridge, the .308 Winchester has built a reputation for being the one-shot solution for many rifles, making it more versatile than other calibers on the market.

Loading a .308 Winchester is easy compared to other cartridges. It can work with a wide variety of powders and bullets, so any hunter can customize his load out on demand. Brass isn’t an issue with the .308 either: nearly all brass manufacturers offer different options for it.

Aside from being flexible, you’re guaranteed to always find a .308 Winchester anywhere. Most stores will stock their own array of .308 ammunition, and even the default factory loads cater to a wide variety of hunting rounds. Whether you’re looking for light, heavy, bonded, or specially bonded rounds, you don’t have to look far to get your bullet fix.

While custom-made match cartridges can perform better than standards rounds like the .308, that also means that they cost more. On average, an exotic match cartridge can cost twice as much and take twice as long to find or deliver than a .308 Winchester. For hunters on a budget or on a time clock, there’s no better choice.

A Standard In The Shooting Industry

The .308 Winchester has become a universal standard for any gun and ammunition company in the world. Because of its history with commercial and military use, the .308 is a common round that many rifle manufacturers chamber for.

This is even more crucial for hunters that travel far away for their hunts. Even if some of your bags get held at customs or are lost in transit, you can easily find .308 ammunition at any gun store in the world.

The .308 Winchester may not perform the best for specialized shooting, or be powerful enough to punch through big game, or even accurate enough to take down targets past 1000 yards. But the sheer versatility and availability of the round means that if you’re ever in doubt, it’s always a superb choice to fall back on.

Recommendations For Bullets And Powders

If you’re feeling a bit overwhelmed by the possibilities with using the .308, there are some tried-and-tested configurations that you can use for your own shooting.

The .308 Winchester performs well with higher-grain bullets since it allows the round to travel farther without losing less accuracy. Since you can seat the .308 comfortably in its case before firing, almost any kind of bullet will work for medium to short-range shooting.

Most hunters will use Sierra 168-grain HPBT Matchkings, with the 155 Palma and 175-grain Matchkings as a close second. A relatively under-picked round for professional shooting is Nosler Custom Competition 155-grain HPBT.

A powder that can provide sufficient force is a must when using a .308 Winchester. Since you’ll be loading in bullets on the heavier side, a powder that can fill the chamber for the maximum amount of kick possible is the only one you should get.

Excellent choices would be Reloder 15, with N140 and IMR4064 offering similar results if Reloder isn’t available.

The versatility of the .308 means that most powders, bullets, and charge weights can give you accurate shots at 500 yards. When in doubt, always consult the manufacturer’s website or the official manual to avoid accidents and mishaps.

For the inexperienced who look at numbers, there’s a good chance they would be confused between the .308 Winchester and the .300 Winchester Magnum cartridges. While they share very similar characteristics (since both of them belong to the same caliber and were created by the same company) they have their fair share of differences too. 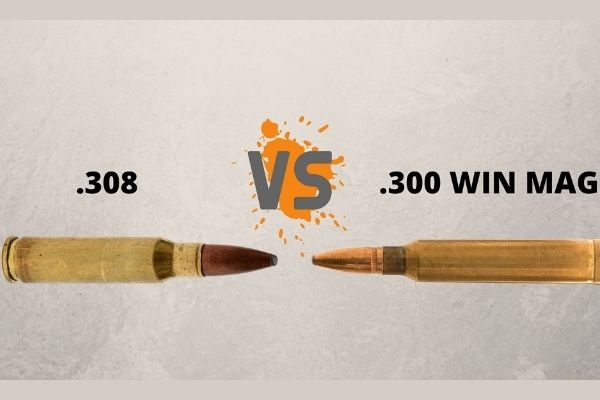 If you’re an avid hunter and outdoorsman that goes through several rounds in weeks, then the .300 can easily overheat your barrel due to the force needed to fire even one shot. In comparison, the .308 barrel is more durable, outlasting the .300 WM by two or three times the amount of shots.

Here is the biggest difference between the .300 and the .308: their bullet trajectories.

Hunters will want a flat trajectory the farther away they have to shoot, as it helps them aim better and compensate for other factors like gravity and the wind. The .300’s aerodynamic design, lighter weight, and stronger kick allow you to take accurate shots at distances past 700 yards without losing penetrating power.

But if the distance is around 300-500 yards, the .308 narrows the performance gap until it’s almost negligible to compare the two. For short-range or target practice, the .308 might be the better option.

The greatest strength of the .308 is how accessible it is. If you aren’t sure about the round that you need or are breaking in a new rifle, the .308 Winchester is an excellent all-around quality bullet that you can always rely on.