Hunting is a lot of things to a lot of people, but certainly among our collective list of definitions, it’s a “sport.” Hunters compete against nature, our quarry, and even ourselves when we wander into the wild. We learn something about our competitors during every trip afield, each time making us better hunters and better human beings. Our game is rarely easy. Perhaps that’s why hunters tend to be some of the finest people on the planet: We continually train to respond positively to adversity. The same can be said of most athletes from just about any sport.

Kendall Jones is a prime example. During the week, when she’s not busy maintaining a 4.0 GPA and studying for her next college exam, you’ll find this dedicated Texas Tech University cheerleader preparing for her next sporting event. She hits the gym every morning at 6 a.m. and practices with her cheer team three times per week.

Then comes the weekend, when this ambitious 20-year-old trades her pompoms and white skirt for guns, ammo and camo. Kendall is a hunter, and as proven when she was recently thrust into the public spotlight after dark attacks by anti-hunters, she’s proud of her hunting lifestyle. When the vile, anti-hunter snakes revealed their fangs and spit ignorant venom, Kendall flashed her pearly whites and responded with uplifting dialogue about the true benefits of hunting. The cold-blooded snakes quietly slithered back into their dens, while hunters stood tall and united above ground to support Kendall and our cherished hunting heritage. 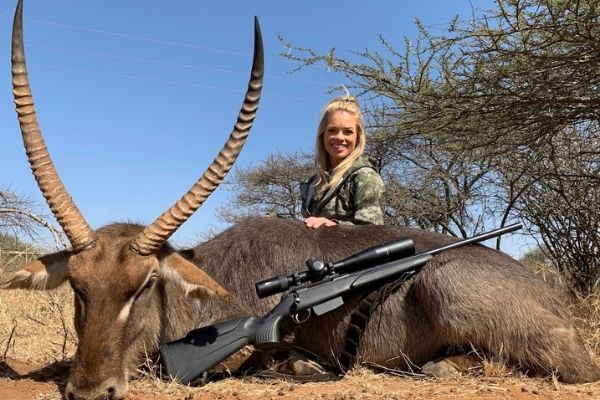 Question: You faced an intense anti-hunting uproar during 2014. What lit the fuse that led to this explosion?

Jones: It all started when I posted a photo on Facebook of me posing with an African lion that I killed during a hunt in the Kalahari. I was really excited about the outcome of the hunt, so as soon as we got back to camp I posted the photo. We didn’t have very good cell phone service in camp, but when I looked at the post a few hours later I saw the response from anti-hunters. It was really bad. I immediately contacted someone from the U.S. to clean up the ugliness on my Facebook page, but it was too late.

Question: What kind of comments were the anti-hunters posting?

Jones: There were thousands of terrible comments, ranging from name-calling to death threats. Many of the comments were so serious that my family and I had to contact authorities to make sure we wouldn’t be harmed.

Question: That’s an awful situation. Some folks would go into hiding after an event like this—in fact, I’ve seen other hunters respond that way before. But you chose a different strategy, right?
Jones: On my trip back to the United States from Africa, I posted several more photos of my Big 5. My hunts were 100 percent legal and ethical, and the meat from the animals I killed helped to feed a lot of people. The opinions of anti-hunters haven’t fazed me. They can say what they want, but it’s not going to change what I do. I think they [anti-hunters] tried to beat me down and make me go dark, but I stood my ground.

Question: As part of your bold response to these attacks, you managed to reach beyond the walls of the hunting community and touch the mainstream public with encouraging commentary about hunting. How big did this get?

Jones: The day before I posted the photos, I had just shy of 15,000 Facebook fans. Today, I have 715,000 fans. When all of this was happening, I gained 130,000 fans in just 1 day. Major news outlets from around the world—not just in the United States—were contacting me for interviews. Reporters were camped out in my front yard trying to get a hold of me. I just continued to tell the story of how hunting is conservation, so I think this ended up being a “win” for all of us who hunt.

Question: That’s an inspirational story. On that note, what advice do you have for other hunters who want to defend the future of our sport?

Jones: You have to stay true to your roots. There’s a common misconception that hunters don’t love wildlife because they kill, but it couldn’t be further from the truth. We need to continue sharing the message that hunting is conservation.

Question: What initially drew you to hunting?

Jones: My dad has always been a hunter. He brought me along on hunts. I got to see how he hunted and how much fun he had. I think it’s a challenging sport that requires a lot of skill and focus. Me and my dad are very competitive with each other. I’m always a competitive person. My dad took me to Africa when I was 13 and my first animal was a white rhino. I had an opportunity to hunt before I went, but I wanted the rhino to be my first animal. I practiced shooting at my dad’s ranch in Texas. I shot the .416 Rem. the first time I went. I practiced a few times and hit the bull’s eye, so my dad called it good. I was very concentrated when we finally found the rhino; I don’t like to screw up. I loved the experience. It got me hooked.

Question: Where did your hunting adventures take you following the white rhino hunt?

Jones: After that, I hunted a few species in Africa, then I went home and I shot a deer for my first time in Texas. Between the ages of 13 and 14, I killed 18 different species. I completed my Big 5 just before I turned 15. SCI doesn’t keep records of hunters’ age, but as far as I know, I was the youngest hunter to ever shoot the Big 5.

Question: Hunting in Africa isn’t for the faint of heart. Did you ever face any dangerous situations on the Dark Continent?
Jones: My hunt for a Cape buffalo scared me the most. I shot it in the shoulder while it was running. It fell maybe 10 yards after I shot it. As I was reloading, my dad stepped out from behind a tree and the buffalo started charging us. He fell just 15 feet from us. Both my dad and the PH had to shoot the buffalo as it was charging. My dad took one big step and stuck his gun out and it touched the [dead] buffalo it was so close. We had been hunting for 5 hours on foot during the hottest part of the day, walking through sticks and thorns, and we were covered in ticks.

Question: I think I’d take the charging buffalo over ticks. I hate ticks! Speaking of appetizing critters, do you like to eat wild game meat?

Jones: When I was 8 years old, I would eat Slim Jims during our trips to Africa. I’ve broadened my horizons now. I will try wild game meat, but I don’t always like it. But all of the meat from the animals I kill goes to good use, whether it be my family eating it or the needy people who we donate it to.

Question: You recently launched a YouTube series. What can you tell Hunting Illustrated readers about it?

Jones: I looked into doing some TV shows, but after looking at my social media numbers I realized most of my followers are young, and probably a lot like me. I personally don’t watch a lot of TV because I’m constantly on my iPhone or iPad, so a YouTube series made sense. It’s called “Kendall Jones: Game On.” Hunting is a big part of the series, but it’s not all about hunting. For instance, in one of my recent episodes I met up with a former Marine who trained me to shoot an MSR [modern sporting rifle/AR-15]. I think a lot of younger kids are stuck to video games and not enjoying the outdoors as much as they should. Now that they can see me out there enjoying nature and everything it has to offer, hopefully I can influence them to explore more than just sitting inside.

Question: You’re an influencer among a “younger” demographic, but you’re also a strong representative of female hunters. What words of wisdom do you have for fellow huntresses?

Jones: The biggest thing to remember is to not be intimidated. Girls shouldn’t be intimidated because hunting is considered a boy’s sport—because it’s not! You can still be a girly girl and go out and hunt with the boys. I get my nails done, go shopping, but I can still get out there and hang with the boys. Another thing is, don’t give up. This summer, I was hunting for a zebra and I missed my first shot. The zebra stopped and I missed again. I was mad and afraid to shoot again, but then I shot a target at camp and I realized I was fine. I’m very hard on myself. I don’t like to miss, but you just can’t give up. Sometimes you mess up, but you just need to accept it and try again.