Adam LaRoche is a Major League Baseball first baseman for the Washington Nationals. He led the majors last season of active first baseman with 33 homeruns and won the “Gold Glove Award” for his phenomenal defense. Adam grew up in Kansas where he developed a love for hunting and the outdoors. He currently resides in Kansas in the off season with his lovely wife. They have a ten year old son and a nine year old daughter. He and his close friend Willie Robertson of the hit Reality TV series Duck Dynasty started the Buck Commander in 2004. Buck Commander is now an award-winning big-game hunting show on the Outdoor Channel. 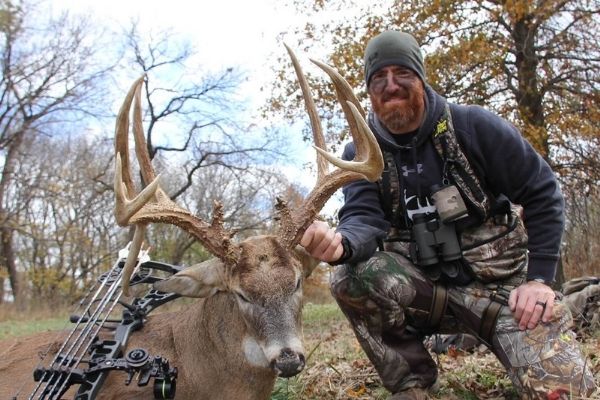 Why do you hunt?

LaRoche: That is a good question and I would have to say because it is my absolute passion. I like baseball and it’s what I do but I love to hunt. I would have to say that I play baseball so I can hunt and it has blessed me with great opportunities in the hunting world.

Would you consider your home state of Kansas as the best state for trophy whitetail in the country?

LaRoche: There are small pockets inside of Kansas with hot zones that are as good as it gets for trophy whitetail. I would, however, have to say that overall Iowa is the number one State and Kansas number two.

How did you get into hunting?

LaRoche: My dad was an avid bird hunter and he loved the sport. I spent a lot of time in the hills with him on his hunts. For my 13th birthday he bought me a PSE bow and that was all it took. I shot my first buck when I was fifteen and from that point on I was addicted. My dad only bird hunted so when it came to big game I would hunt with neighbors and friends and that just added to the fun.

When your MLB teammates find out you’re an avid hunter what is their reaction?

LaRoche: Most of them are interested in learning more about the sport and others think I am crazy for spending so much time sitting in a tree stand. I have an open door policy at my ranch in Kansas for my MLB teammates and friends to come hunting at the ranch. When they do come for a few days and hunt with me they start to get it. They usually enjoy the taste of the hunt and we have converted many into hunters.

In my years in the industry I have met many celebrities and I find that the majority of them choose not to be vocal about their passion for hunting in fear of what the public will think. You seem to be the exact opposite why?

LaRoche: We have to stand up for what we believe in and stand up for our Second Amendment rights to bear arms. I have two kids that love to spend time in the outdoors with me. I see kids that spend their time in the outdoors and those that spend their time in front of the TV playing video games and there’s a big difference. We need to get our youth outside experiencing God’s creation. It gives us gratitude and makes us all better people.

Tell me about Buck Commander.

LaRoche: Willie Robertson, a few other buddies, and I kicked around the idea of evolving Duck Commander into deer hunting, and of course Buck Commander was the logical name. We started the company in 2006. There are now six owners with me and Willie being the originators and now we have Luke Bryan, Jason Aldean, Ryan Langerhans, and Tom Martin as owners with us. The idea was to make hunting DVDs at first with hopes of paying for a few of our hunts. We didn’t realize it was going to be one of the top rated shows on the Outdoor Channel. We want people to feel like they are in hunting camp with us and the best part of our show is the camaraderie of the guys; it’s a blast hunting with people that are your buddies and that you love to be around.

My family’s favorite TV show is Duck Dynasty. You’re close with the Robertson’s so I would ask you why do you think Duck Dynasty has become so wildly popular?

LaRoche: I think because it’s a feel-good show that the whole family can watch. From grandpa to the kids in the family there’s something for everyone to enjoy. There is no half naked women, no cussing, and there’s a feel-good message of hope and love in every show that you see and feel through the Robertson’s faith.

What is your favorite weapon?

LaRoche: Obviously archery equipment and despite my first bow being a PSE I now shoot Matthews.

What is your favorite species to hunt?

LaRoche: Of course the Whitetail deer.

Last question, what is your dream hunt?

LaRoche: My dream hunt is grizzly bear with my bow and hopefully to have my son at my side as we stalk the ultimate predator.