What good is a blunt hunting knife? When on the hunt you need your knife to be as dependable as possible, and that means sharp enough to cut through anything you’ll need to, whether that’s gutting, skinning, deboning, or other camping activities too.

To keep your knife in its best shape you’ll need a sharpener, and fortunately for you we’ve found a series of options and listed them for you below.

There are five in total, each with a small write up of their features that are also condensed into pros and cons so that we can get to the point.

Along with the list is a buyers’ guide and an attached FAQ so that you can find out how these sharpeners work and use that knowledge to better fit your purchase to the gear you have.

In a hurry?
This is our Winner!

Why it's our top pick?

Got a dull blade? If your blades are in need of some sharpening for the next hunt, we have our top suggested option here for your convenience.

We chose the KME Precision Knife Sharpener System due to the unrivalled choice it gives hunters in sharpening blades.

See what we mean in more detail below:

The first suggested product in our list is the KME Precision Knife Sharpener System, which retails with four Gold Series diamond hones to get your knives to the best edges possible, each with a different grit for varying degrees of coarseness or fineness to suit your preferences.

Speaking of preferences, it also has adjustable angles from 17 to 30 degrees, being adjustable at one-degree increments for that namesake precision sharpening. The chosen angle will never deviate thanks to the system’s spherical bearing rod which keeps the angle in line.

Another stability feature is the neoprene-lined clamp which protects your blades against any scratching or marring that may otherwise occur during use and includes depths lines, so you know how to reposition your blade for touch-ups.

The entire system is portable thanks to its mounted base and it’s in good hands when being transported since it comes with a hard carry case that’s foam-lined on the interior. 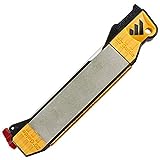 The second option in this list will be many people’s first, it’s the Work Sharp Guided Field Sharpener is definitely the option to go for if you want the most portable sharpener in the list.

It’s not number one on this list for its lack of moving parts, but that fact and the general affordability of this product will be huge pros for a lot of you out there.

The fact this sharpener is portable makes it ideal for other uses, such as sharpening broadheads, and that versatility is reflected in the fact that this is Amazon’s #1 best seller in hunting knife sharpeners.

The sharpener uses a combination of diamond plates and ceramic honing rods to sharpen every inch of your blades in a speedy but consistent manner.

The diamond plate guides are laid at a 20-degree angle for sharpening, whereas the ceramic rods have a 25-degree angle guide and can be used to hone micro-bevels, or sharpen grooved fish hooks, and a secondary rod can also be used to sharpen serrations.

Since it’s a portable sharpener, it’s very compact and durable enough to brave most conditions you’ll want to find yourself camping in. There’s also no assembly required, making this a hassle-free option too for those of you who prefer the simpler things.

At the midpoint in this list is something a little different with the Chef’s Choice Trizor XV EdgeSelect Electric Knife Sharpener. This genius little system can not only sharpen knives but can convert the standard 20-degree knife edges into razor-sharp Trizor XV 15-degree edges for better carving performance.

It sharpens using abrasive made from 100% diamond that can be used for straight and serrated edges, and it works in three stages as per its Edge Select system. This works by sharpening and honing the blades with the abrasives, before polishing them to add to their lifespan.

It's an incredibly convenient product, sharpening in record time at only one minute for a full sharpening and just ten seconds for re-sharpening a used blade. That re-sharpening is also easier since it’s electric, and so is operated by a simple on/off switch.

This means that not even elbow grease is really needed in order to get the perfect edge. The fact it’s electric not only means it’s more expensive but makes it not as portable as other kinds of sharpener, so we think this is best used at base before venturing out on your hunt. 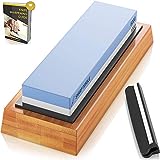 Coming in at four is a simple product that can sharpen any blade, whether that be hunting, chef, scissor, or axe. It’s the Sharp Pebble Premium Whetstone, an affordable and no-frills sharpening kit that comes well-reviewed by its many patrons, enough to be ranked as an Amazon’s Choice product for sharpening stones.

The stone itself is two sided, with one side being 1000-grit for sharpening and the other being 6000-grit for more delicate honing, though we should caution that this isn’t the best option for if your blade is very complicated, e.g. with lots of hooks or serrations.

It’s a simple enough product to use since it requires no expensive honing oils or any other special care, just add water. The non-slip bamboo base looks good but gives the sharpener a domestic aesthetic to it that we think makes this product look better at home than out in the field with you, but despite that it’s durable enough that it can be brought out with you as long as you can find somewhere to set it down.

What we’ve failed to mention is that this product is actually a bundle, and with it you not only get the stone but also some literature to read which will help you get to grips with this product and outline specific techniques for different blade types. 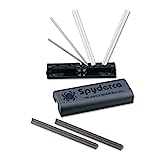 At number five is a tri-angle option in the form of the Spyderco Tri-Angle Premium Sharpmaker, for those who want even more versatility out of their sharpeners.

The action in this sharpener happens at two ceramic sharpening stones which are as versatile as stones can be, being able to sharpen knives, darts, and fishhooks thanks to its 30 and 40-degree angles.

For how versatile it is, sharpening can be as easy as you like it to be since it doesn’t require lubricant, oil or even water, but can be used with them if you have preferences.

The ABS plastic case that this product comes in also functions as a base for the sharpening itself, and that case is good enough that it can be used to take the Sharpmaker with you for use on the trail.

Other accessories the Sharpmaker comes with includes an instructional book and DVD, which is handy for beginners but may be unnecessary for those who know what they’re doing.

The fact this is a bundled product also undoubtedly contributes to the fact that this is a pricey product, one of the priciest in the list, making this a purchase you need to justify if you have a specific sharpening use in mind that this product fulfils.

What makes the best sharpener for hunting knives?

A good hunting knife sharpener is easy to use, doesn’t present a risk of damaging your blade, and can preferably be transported for use outdoors so you can rely on it more than you can with domestic sharpeners.

Sharpening and Honing Plates and Rods

The sharpening in both manual and electric sharpeners use abrasive plates, with manuals having more adjustability in that you can have several plates and rods with differing degrees of coarseness and fineness. These are measured in grit, which is a measurement of the coarseness of the stones, plates, or rods used.

As a general rule, less than 1000 grit is best for knife repairing, up to 3000 is best for knife sharpening, and up to 8000 grit is very fine and best suited to refining knife edges. Most sharpeners retail with multiple grit levels, and if not they’re available as periphery purchases.

Even the waterstone at number four is double-sided for sharpening and honing purposes.

Manual knife sharpeners have angle guides because it’s tricky to maintain the correct knife angle to get the best edge. This adds difficulty to manual sharpeners as you need some experience with them in order to better hand sharpen them.

The best angle guides are adjustable ones that’ll allow you to change the sharpening angle depending on the knife you have.

The portability of sharpeners is something to look for in hunting knife sharpeners if you want a model you can take with you. This is as simple as seeing if the product comes in or with carry bags, or even better a hard case so that the sharpener and any of its smaller instruments can be safe in transport.

Manual knife sharpeners are the preferred method of use for many outdoorsmen. This is because there’s a sentiment that electric knife sharpeners can’t be as sensitive with the blade as electric knives, which are seen as being too aggressive, and so manuals make it easier to control the pressure and speed of your sharpening.

Depending on the kit you get, manuals tend to be less expensive, and they’re also more portable and require less space.

This takes a fraction of the time and energy that manuals would need. Electric knife sharpeners are made to be as compatible with as many knife types as possible, with not just Western but Eastern knife styles too. Sharpening is done on a setting basis, which means that it’s very precise to the degree of sharpness needed.

To what degree should a hunting knife be sharpened?

Hey, it’s your knife, you can do what you want with it. That said, there are guidelines for selecting which bevel to give your knife. Lower angles may be sharper but make the edge less durable, and so there needs to be balance if you want a hunting knife that can cut hide without breaking, but be sharp enough to cut the meat beneath too.

Hunting and survival knives are therefore recommended at a 25 to 30-degree angle.

This means that if you have a very upmarket knife made from super steel, which has above-average hardness, an electric sharpener can be too rough with it, to the point of causing damage.

These are things you need to consider when making your decision. We concur that it’s better to learn sharpening by hand so that you can be as self-reliant a hunter as possible, but for those who need a convenient and fast way to sharpen their mid-range knives an electric knife is a very useful appliance.

Can you sharpen a knife with sandpaper?

You can use sandpaper to sharpen knives if they’re of the same grit. However, this brings up the complication that manual knife sharpeners have, only tenfold, and that is the question of whether you can strike the knife at the exact same angle repeatedly until you get the intended result, that result being a knife sharp enough to carve through the hides of sinew of hunted game.

We’re assuming that since you’re here you may not be well-versed enough at sharpening to be able to achieve this level of sharpness, but if you are then sandpaper is a viable and relatively inexpensive option. There are a few other inexpensive methods of sharpening knives, with some even using the coarse bottoms of plates or coffee mugs to get the job done.